I am back with a blog named ‘The movie review Aladdin.Did you here about the movie.It is actually a famous Hollywood movie.It was released on 24th May 2019 and is still running in the theater.I liked the movie a lot, I saw it in 3D.The movie was awesome.

I liked the movie because the story was good and seeing in 3D is more awesome.It was a story about where there was a princess named Jasmine who was the daughter of the first Sultan.And do you know who is Aladdin? Aladdin is a thief who was sent by another person into a cave to get a magic lamp which has a genie in it.He has a monkey named Abu.When he got it  and gave it to him he got locked in the cave but the monkey took of the magic lamp and the person who asked the magic lamp saw where he kept it and it was not there.Afterwards he shouted ‘nooooooo’ because he knew that Abu must have took it.And afterwards Aladdin rubbed the magic lamp and a genie and the genie showed many proofs to make Aladdin believe him.The magic carpet helped him to get out of the cave.Firstly he wished that he becomes a prince.After he became a prince he changed his name because always the people would find out he is Aladdin.His name was changed to Prince Ali.Then the person who sent him to the cave found that he is Aladdin and then tied him to the chair with a rope and kept him on a place where water was there under.Then he pushed him with a stick.Then Prince Ali died in water then the genie came and was just telling “tell I want to get out of the water’. 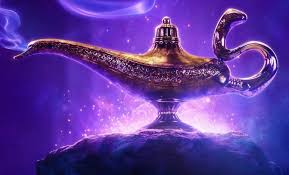 See the movie to get to know more about the movie…

Why do I recommend it?

I recommend it because the story is very interesting and if you see it in 3D it would be awesome.Aladdin is a amazing movie because it is very different.The movie is for 2h10min.